Guinness World Record #2 , For The Paddle Ball King
Ok,
I know it's not juggling, but it is my blog, and if I want to mention something exciting in my life, I will do it here, even if it is just peripherally related to juggling.
As some of you may know, and even participated in, I organized an attempt for a Guinness World Record for "The Most People Controlling Paddle Balls At The Same Time" back in Sept. 3, 2011. Well, I "finally" got my certificate in the mail yesterday to make it "official", only to find out that the record was beaten on Jan 25, 2012 (just recently) at corporate event for Johnson & Johnson in the UK. We set the record at 356, held it for almost 5 months and then they beat it with 412. Kind of sucks to find out about winning a record at the same time as finding out that you no longer hold it! Oh well, I guess that's life in the realm of World Records, I guess. The best thing I can do is attempt to beat it and reclaim my/our record. I have already put the wheels in motion for this to happen. I have applied for and received Guinness' approval for a certified attempt to beat the newly establishes record and reclaim it for its rightful owners. Here is a link to a news story on this...
DavidsonNews.net
Posted by A Fettucini Brother at 9:19 AM No comments: 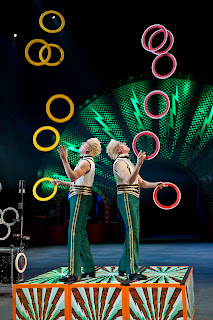 The Fusco Brothers
The Fusco Brothers are one of the featured acts in the current touring Ringling Brothers show, "Fully Charged". Click Here to see the touring schedule for this particular show.
Posted by A Fettucini Brother at 12:05 PM 2 comments:

OK,
Not sure if anyone at all is tuning in at this point. I ended up taking another 6 month hiatus from any entries here. Guinness World Record Paddle Pursuits took over my time and focus for a while there... that is what very little time that I have to spare from being a parent to 2 girls, a husband, and running and agency as well as booking and performing with 2 different acts. Whew!
As we all may be aware of, at this point, the last printed issue of JUGGLE magazine has been published. It is the end of a printed magazine for the US juggling community. They say that it "may" come back at some point, but I seriously doubt it. WIth printed media going the way of the dinosaur, I do not see one ever starting back up, once it is gone. There will be an eZine version that will have some cool features that a printed magazine could never have, but for me personally, I will miss getting a printed "trade or industry" magazine in the mail every so often. For many years, when I was very busy juggling and traveling all over the world and did not attend conventions at all (a period of about 12 years) this magazine was my "only" connection to the IJA and the juggling community at large. I relished every word, every photo and every story.
I must, at this point, give a big shout out to my long time friend and the whole reason that I joined the IJA, Bill Giduz. He was president of the IJA when I first met him as a total "newby" juggler. He not only was the President of the IJA, but he was also the Editor of the "Juggler's World" magazine, which was what the magazine was named before it became "Juggle" and edited by Alan Howard and published by Stan Allen. Bill put in years and years of excellent service asa President and Editor, and for those many hours he put in, I stand up, applaud and thank him.
To be honest, this was my introduction into the magical world of juggling. Having Bill close by, as a friend, afforded me a window into this world and a network of friends that has led me to where I am today. Bill would get the magazines published at a printer here in Charlotte, and he would recruit myself and my first juggling partner to help him stick all of the mailing labels onto the magazines before sending them out. As I had spent a lot of time reading back issues of the magazine and immersing myself into the juggling world, I got to know who the Big Names and Big Stars were in the juggling world. It was very exciting to come across the label of some famous or legendary juggling act and have the honor of knowing that the very magazine that I held and stuck the label on, was going to be in the hands of a famous juggler soon. I often wanted to put little post it notes, saying "Hello" in there to them, but never did. LOL.
So, needless to say, for me, this is yet another "end of an era" in the publishing of a printed magazine. As this blog was actually inspired from a column that used to exist in the old Juggler's World magazine, the ending of Juggle, has caused me to "re-think" and "re-evaluate" this blog. Seems like it may be a good time to bring it back to life... or not. I was never sure how much often it was being read or visited, but it seemed like it has the possibility of being a great resource for where to go and see Juggler/Variety acts as well as when to watch for them on TV.
Let me know what you think? Post a comment? Who is out there? Is anyone still reading this blog at all?
Posted by A Fettucini Brother at 11:34 AM 4 comments:

Video of Anthony's performance at the game...

Posted by A Fettucini Brother at 2:01 PM No comments:

Move over, KÀ. The performers of Cirque du Soleil's La Nouba troupe in Orlando are coming to Tropicana Field on Sunday to entertain the crowd before the nighttime game against the Boston Red Sox.
Click here to read the whole story online...
Posted by A Fettucini Brother at 9:33 AM No comments:

The Juggler of Carlsbad

Here's a nice article about a street performing Juggler who works in Carlsbad CA.
The writer does not bother to learn or find out the juggler's name, but seems to enjoy what he does. Anyone know who he is writing about?
Posted by A Fettucini Brother at 9:12 AM No comments: